After a long exile, we found a new home

While Confront/Arrange/Deny were pretty close to each other, you could restrict the stats used for each to make it interesting.
Top

So here's the next iteration of the "Core Moves" that I've been toying with. There are just two, which I think are very nice mirrors of each other:
- Face Adversity, which handles all action.
- Seek Opportunity, which handles downtime. 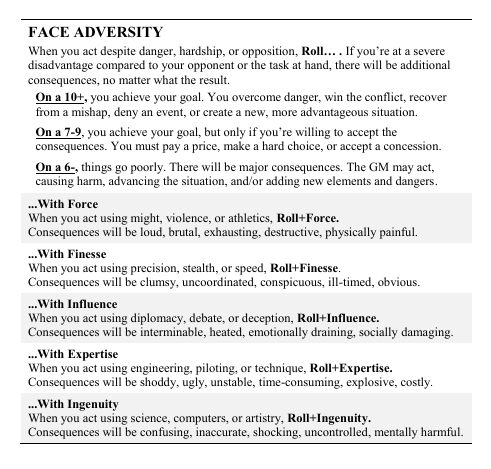 Face Adversity as a singular Move "works", but had a lot of communication and presentation issues. So here I've re-framed it, so that each stat modulates the Move. Veterans of the game may notice that this "new" Move is very similar to how Face Adversity already works in 1st ed UW. This version of it creates guidelines and sets expectations, giving each Stat a different flavor while ultimately being the same move. Eventually, the GM won't even need to refer to this; they'll have internalized the core resolution system, and the guidelines for consequences will become second nature.

This presentation is an offshoot of the "advanced Origins" from FBH, which allowed you to use a specific stat to do things the stat normally couldn't do, in exchange for specific consequences.

Also, the concept of "superior opponent" has been incorporated into the opening of the Move: "no matter the result", you'll suffer consequences if you take on a superior foe/threat. 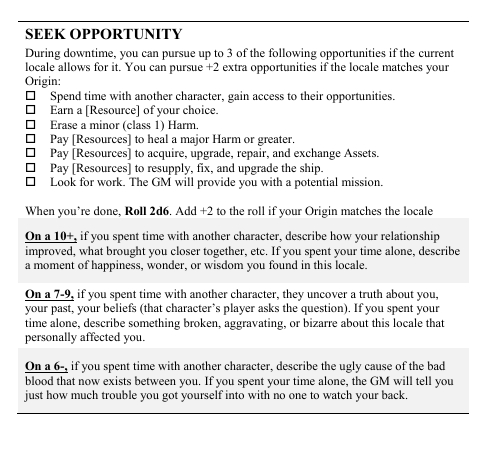 The "match your Origin" bonus is meant to make one's Origin relevant in the characters life. It also means that Galactic characters are more suited for long space flights, because downtime on the characters' ship is a Galactic locale (with few opportunities outside of healing injuries and such).

For advantages, you could make it Create/Remove Tag. The tag does what it says in the fiction (like the great gear tags from UW) and can also give you a +1 (like forward or ongoing or data point). If harm and damage is also handled by tags then you can also use this move to repair, heal, etc.

As for stats, maybe you could use Force, Finesse, Influence, Smarts, Expertise. You use Smarts to observe, deduce, recall, calculate. You use Expertise to repair, treat, hack. You could prevent Expertise from being overpowering by requiring a specialisation like the ones for Academic. E.g. You can remove minor and moderate damage tags from your starship with Expertise but you need Skill to remove Severe ones.
Top

While I do generally approve of this idea, I've found it to work best as a "soft" rule. Player agency vs GM control is definitely one of the levers I can use to modulate rewards/punishments, but where that division happens in the distribution of resolution results can vary.


Bloodwork wrote: ↑
Mon Apr 29, 2019 3:02 am
For advantages, you could make it Create/Remove Tag. The tag does what it says in the fiction (like the great gear tags from UW) and can also give you a +1 (like forward or ongoing or data point). If harm and damage is also handled by tags then you can also use this move to repair, heal, etc.

I'll be honest, the FATE-style situational/temporary tags don't really appeal to me in this context. While the Asset tags are a necessary descriptor of the Asset's permanent capabilities, temporary tags need a more robust framework to not feel tacked on. Without a gameplay loop that leverages those tags, they simply act as shorthand for the current narrative positioning. Not saying it isn't useful to jot down reminders like "flanked" or "radiation leak" on a pad of paper during play, but building it into a system of bonuses and penalties and harm and healing and such is far outside the purview of UW, and would be a different (likely FATE-adjacent) system.


Bloodwork wrote: ↑
Mon Apr 29, 2019 3:02 am
As for stats, maybe you could use Force, Finesse, Influence, Smarts, Expertise. You use Smarts to observe, deduce, recall, calculate. You use Expertise to repair, treat, hack. You could prevent Expertise from being overpowering by requiring a specialisation like the ones for Academic. E.g. You can remove minor and moderate damage tags from your starship with Expertise but you need Skill to remove Severe ones.

For the moment, the division I'm sticking to is Manual vs Digital, Experience vs Inspiration, Machine vs Computer, etc.

[Edit] Hope you don't mind, wanted to unpack a bit of design discussion. Let's leave aside that the suggested Expertise covers all educated and skill-based professions, and would need a secondary artificial layer of rules to constrain it. Let's focus on the proposed "Smarts" for a sec:

The main issue with "Smarts" as described above is that it doesn't translate to actions in gameplay. Note you used active, externally affecting terms to talk about Expertise (repair, treat, hack). It's what you do with this stat, what you accomplish, how you can change a situation. Meanwhile, Smarts' verbs were inward-facing, passive, non-actions that are almost always hand-waved part of a larger "real" action. Remember facts about a person to charm/convince/intimidate them, calculate angles and trajectories before you pull the trigger on a long range weapon, figure out what part of a machine needs to be repaired, etc. There's also the issue of fail-states. I can easily think of fail-states for hacking or medical treatment, but what would be the fail-state of "Memory"? I'm afraid "Smarts" has the same problems that D&D's "Intelligence" and "Wisdom" runs into: a raw mental-capacity stat with no attached skill-set and little narrative-action applicability.
Top

And I'm very interested to see how FBH's supernatural careers will slot into UW2 and the Seek Opportunity move. Resources are also an intriguing concept that I hope we'll see more on soon.
Top

Results of a bit of design brainstorming with my regular gaming group (<3 you guys). We're trying to hammer out the way skills will work with the new Face Adversity design, since theoretically Face Adversity can allow you to do anything.

There are four "modes" to making actions: The right kind of Asset will make otherwise Impossible or Overwhelming tasks far more possible.

I like the Challenging/Overwhelming distinction. It could also cover not having the right tools for the job pushes the difficulty to Overwhelming. E.g. no medical gear while trying to patch someone up or bringing a knife to a gunfight.
Top

I really like the concept of opponents having advantage, or "upper hand", or overwhelming challenge -- I haven't tried it in actual play yet, but it really seems like it should set up a nice two-step narrative dynamic in confrontations where first the PCs have to find a way to avoid or deny the opponent's advantage, then push for a decision in the conflict.

On the other hand, I'm not really keen on trying to reduce the whole system to one abstract Face Adversity roll. It is true that at the core, the PbtA system is one move:
Everything else is embroidery, but that embroidery matters, both for creating the sense of genre in the system and also for explanatory purposes. For instance, what happens to Assessment? What does it mean to "accept the consequences" on a partial success with Assess or Persuade? If you're trying to help out an ally who has just totally fumbled, how much benefit do you get from a full success on "helping"? If you succeed at Facing Adversity by stabbing an enemy, are they dead? Injured? How many hits can they take? This stuff has to be written somewhere, and you can do it in examples or discussion, but there is an elegance to laying it out in specialized moves. The key is picking the right specialized moves, and making sure they add something more than just a restatement of the base move.

I would argue that Opposition should be a kind of meta-move:
* When facing an opponent who holds advantage, it may be advisable to make moves looking to nullify that advantage or gain advantage of your own before pushing a direct attack.
* An opponent may hold advantage against certain moves (like charging a fortified position) but not against others (like stealthily circling to the rear).
Top

I like that you're explicitly defining action positioning. I think it might be valuable to add "Easy" (or similar name) as a category as a counterpoint to Overwhelming. It might be something that always succeeds, no matter the result, but your roll decides if there is a complication.
Top
Post Reply
21 posts